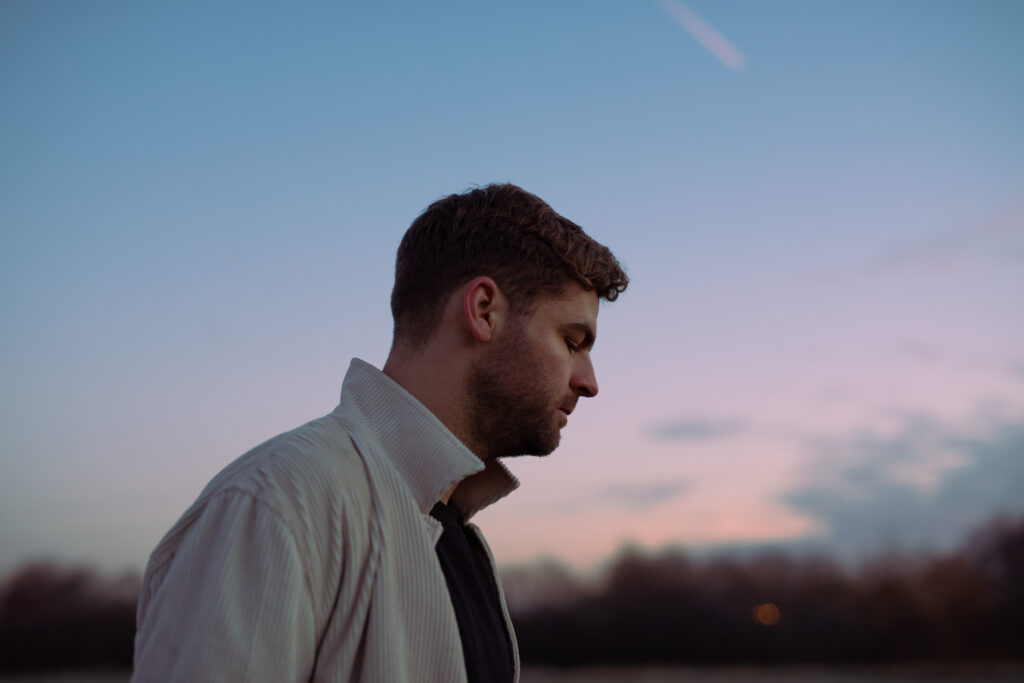 Newcastle-born, London-based multi-instrumentalist AJIMAL confirms his upcoming album, As It Grows Dark / Light for release on June 26. The album was produced with Guy Massey (Spiritualized, Bill Fay, The Divine Comedy, The Beatles, Paul Simon), and showcases AJIMAL’s haunting and bold songwriting, with intimate vocals that weave an otherworldly soundscape of unconventional synth, piano and string textures.

AJIMAL is the creative outlet for Fran O’Hanlon, a doctor by day, who acquired the project’s name in the aftermath of being caught up in Haiti’s 2010 earthquake crisis. Whilst working at a field hospital during his medical studies, he found himself in the presence of an infamous former voodoo priest, from whom he would later derive the moniker. Following this experience, O’Hanlon went on to release his 2015 AJIMAL debut with CHIILDHOOD, recorded and released as he was qualifying to be a doctor.

As It Grows Dark / Light is the product of a collaboration with Guy Massey which began fortuitously, when O’Hanlon won a Focusrite recording competition, despite never having entered (he suspects a friend did so on his behalf). Although a classically trained pianist, O’Hanlon feels much more comfortable writing and exploring music by ear, rather than through the more rigid classical syllabus he grew up with, and he further credits Guy Massey for pushing his boundaries as an artist. Of their unconventional recording experience, he explains “Guy and I have recorded all sorts of bizarre things in the time we’ve been making the album… we’ve prepared pianos with gaffa tape and coins, we’ve used hairdryers to blow toilet roll onto guitar strings to create drones and put silicon beads in speaker cones to record the vibrations, scrunched biscuit wrappers to sound like footsteps on gravel, time stretched pianos, harps, strings, voices, musical saws. It’s been a lot of fun to experiment with.”

Ahead of the album, AJIMAL unveils an Everything Everything remix of How Could You Disappear? on 22nd June – a song about the fickleness and frailty of memory. Recent single, Above All Else, Be Kind, was accompanied by a video O’Hanlon made during a week of self-isolation when he contracted Coronavirus. He recruited friends, family and colleagues from both the medical world and fellow musicians to film themselves in isolation. The video includes doctors, nurses, paramedics and physios working across the UK as well as a host of musicians such as Lucy Rose, Paul Thomas Saunders, Eliza Shaddad and Lanterns on the Lake.

AJIMAL also drew in others in his orbit to contribute to the sonic textures of the release. He is also accompanied by a stellar cast of string and brass players, including Sal Herbert and Ian Burdge. School friend Emily Hoile, of the Berlin Philharmonic Orchestra, features on harp as well as London-based composer Hinako Omori, another chance meeting via the competition, who adds flute to the equation. O’Hanlon sought out acclaimed German digital collage artist Drømsjel, who created a custom collection for the album artwork.

AJIMAL is shortlisted for Glastonbury’s Emerging Talent Competition in 2020 and singles including ‘How Could You Disappear?,’ ‘ANIMALS’, ‘It’s Real’ and ‘Above All Else, Be Kind’ have featured on several Spotify editorial playlists and has found fans at radio including Phil Taggart at Radio 1, Tom Robinson at BBC 6 Music, John Kennedy at Radio X, BBC Introducing’s Nick Roberts, and Jason Kramer at KCRW. During his live show, AJIMAL encompasses elements of both soaring grandeur and pin drop intimacy - which has earned him support slots alongside the likes of LYR, Kathryn Joseph, Lucy Rose, Loney Dear, Lanterns on the Lake, The 1975 and Nadine Shah. He has played sold-out headline shows at House of St Barnabas and London’s Folklore with recent online sets at How the Light Gets In and a live session for Laura Whitmore on BBC 5Live. An EP of remixes will follow the album release, with confirmed contributions from Everything Everything, AVAwaves, Hinako Omori and Edd Gibson (Friendly Fires).