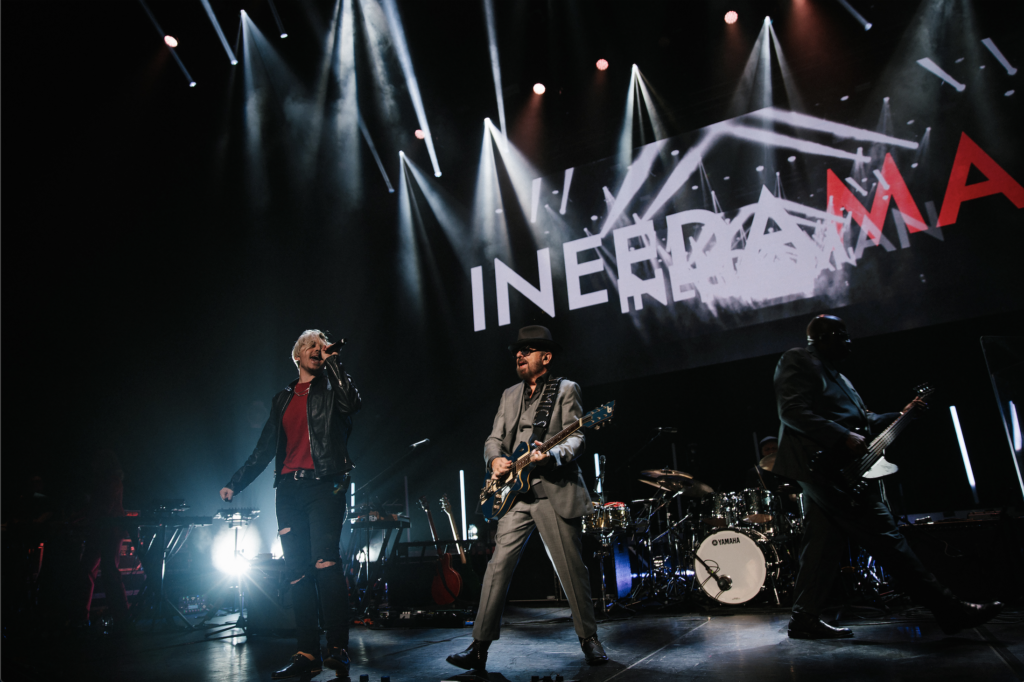 Award winning singer, songwriter, musician, producer and Eurythmics co-founder Dave Stewart is recognized as one of the most respected and accomplished talents in the music industry today with a music career spanning four decades and over 100 million album sales.

Stewart co-wrote and produced each Eurythmics album in his world-famous duo with Annie Lennox, and has also produced albums and co-written songs with Mick Jagger, Tom Petty, Bob Dylan, Gwen Stefani, Jon Bon Jovi, Stevie Nicks, Bryan Ferry, Katy Perry, Sinead O’Connor, Joss Stone, and many others. Along the way, his work has garnered numerous awards including 26 ASCAP and BMI Awards for most performed songs, 4 Ivor Novello Awards, 4 BRIT Awards for Best Producer including a Lifetime Achievement Award, The Silver Clef Award, The Clive Davis Legend in Songwriting Award,  a Golden Globe and a Grammy Award and he was inducted into the UK Hall of Fame.  In 2018 Eurythmics were nominated for the Rock and Roll Hall of Fame. They were recently inducted into the Grammy Hall of Fame for “Sweet Dreams (Are Made Of This)” and in June, 2021 they will be inducted into The Songwriters Hall of Fame.

In 2001, Stewart was approached by Nelson Mandela to help fight against the Aids epidemic. Stewart developed a Global Campaign using Mandela’s prison number 46664 as a telephone number. When people dialed this number Mr. Mandela answered followed by new songs Dave had written with Joe Strummer, Bono and Edge, Paul McCartney, and many others. While you listened, money was being donated into the 46664 foundation by the telephone companies. He then went on to organize the biggest concert ever staged in South Africa, appearing on stage with Beyonce, Bono, Bob Geldof, Queen, Anastacia, and longtime partner Annie Lennox. The concert was broadcast live to over 1 billion people and Oprah Winfrey devoted a week to this special event.

Stewart has scored films for several directors, including Robert Altman, Paul Verhoeven, and Ted Demme.  Additionally, he  has written and produced the title songs for many hit movies and, together with Mick Jagger, he wrote and produced the score for Alfie, starring Jude Law, which won the pair a Golden Globe for Best Original Song.

Stewart along with songwriter/producer Glen Ballard wrote the music for the musical adaptation of the 1990 Jerry Zucker film Ghost, which opened to rave reviews in London’s West End July, 2011 and premiered on Broadway April 23, 2012. Ghost is now on Tour throughout ten countries including, the US, UK, Germany, Italy, and Australia.

Beyond his creative work as a musician, Stewart is a renowned film and TV producer, author, photographer, and entrepreneur. Stewart has established Dave Stewart Entertainment (DSE), a "media company for the new world" (The LA Times), linking creative ideas to a host of projects in music, film, television, books, theatre, and new media. As the creator of content for DSE, Stewart has married his passion for music, film, and television by creating a number of high profile projects.

In 2011, Dave formed the supergroup Superheavy with Mick Jagger, Joss Stone, Damian Marley, and AR Rahman. The resulting album mixed rock, reggae and rap and was an international success, reaching number one in several countries.

In 2013 Stewart joined Talenthouse as Creative Director of Marketing. Talenthouse is a community of professional creatives that provides a platform for artists to be seen, heard, and compensated. Comprised of independent artists from all over the world, Talenthouse gives direct access to creative briefs from leading brands, agencies, and entertainment icons.

In February 2016, Stewart released his critically acclaimed memoir Sweet Dreams are Made of This with a foreword by Mick Jagger. For the first time, Stewart shares the incredible, high-octane stories of his life in music: the A-list collaborations and relationships, and the creative process that brought us blockbusters from Eurythmics like “Here Comes the Rain Again” and “Would I Lie to You,” as well as Tom Petty’s “Don’t Come Around Here No More,” No Doubt’s “Underneath It All,” and many more.

Most recently, Stewart created and is Executive Producer of the hit TV show for NBC - Songland. Teaming up with multi award winning TV Producer Audrey Morrissey  and under NBC’s helm, Songland pulls back the curtain on the song marketplace and the multiple avenues in which songs can generate revenue. In a “Shark Tank” setting,  Songland takes us on a journey in search for America’s great songwriters. The popular series just wrapped its’ second season of production and premiered on NBC on April 13, 2020.

Coming out the summer of 2020 - Stewart has once again teamed up with singer/songwriter Thomas Lindsey to release their new album, Amitié, on Bay Street Records, a division of Dave Stewart Entertainment Limited and distributed by The Orchard. Their new project is scheduled for release on Friday, July 17, 2020. The album will be available on all digital and streaming platforms. The first single, “Liberation” will be released on May 15, followed by a second track from the album, “Storm Came” on June 5 and finally “Hold On” on June 26th.

Meet Django Stewart, the emerging face of alternative soul-pop who is preparing to release his debut solo EP this summer, with lead singles “Burning Bridges (For Your Love)” and “Just For Tonight.” Both are soundtracks for finding levity in darkness and grounding down in times of total chaos, and each has a video directed by Sophie Muller (the seminal artist behind legendary videos such as Rihanna’s “Stay,” Lana Del Rey’s “Young and Beautiful,” No Doubt’s “Underneath It All” and Sade’s “Kiss of Life”).

As a songwriter, Django is focused on collaborators who bring him the most joy, especially the legendary Nile Rogers (co-founder of CHIC and exec producer of Bowie’s “Let’s Dance”) and the emerging talent Able Heart (who wrote “Greenlight” for the Jonas Brothers after winning an episode of NBC’s “Songland.”) The forthcoming record features special guests Nile Rogers, Carmen Vandenbergh, HANNIE and Tyler Aubrey and tracks from Able Heart, SG Lewis and SMLE. Inspired by idols such as David Bowie, Jeff Buckley and Bjork, Django’s music currently finds itself in conversation with contemporary artists like Dua Lipa, Sam Smith, Lana Del Rey and Doja Cat. Through his lyricism, Django paints glamorous portraits of cinematic romances and nights under enchanted stars, while also exposing these landscapes as ultimately fatal. Heartbreak flooded in neon pink club lights. Classic romance washed with freedom, power and irreverence. Love songs for queer people. Love songs for everyone.