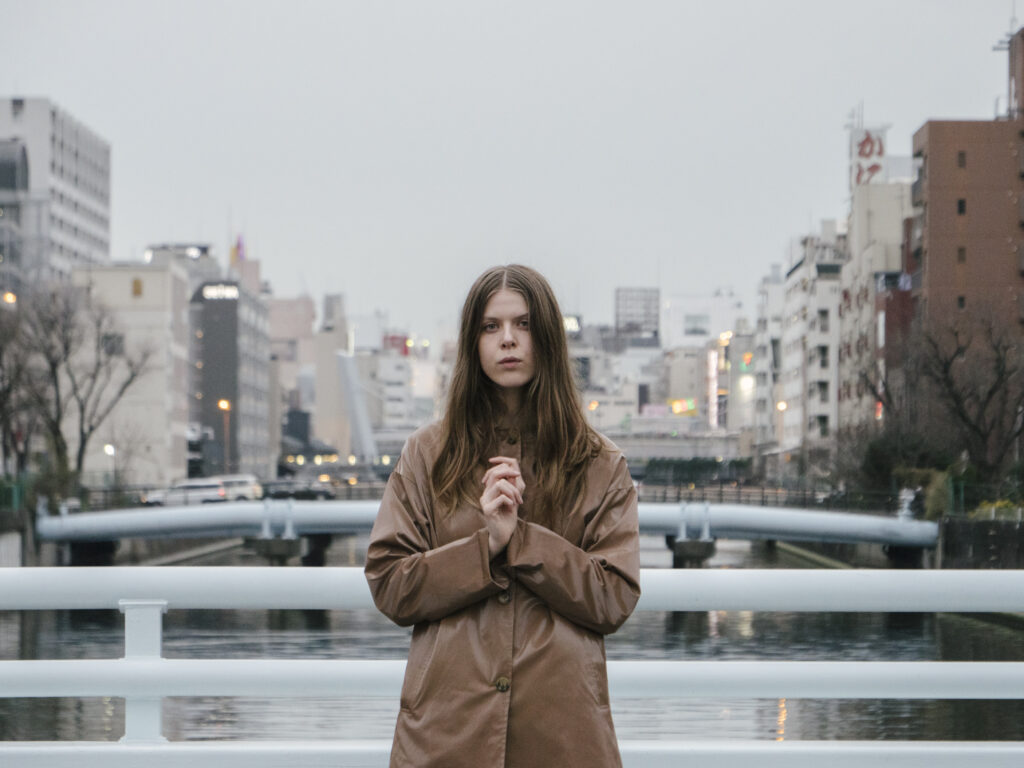 That question sits at the core of New Dreams, Jófríður Ákadóttir’s second album under the moniker JFDR, released on her own label, White Sun Recording. Her first solo album, 2017’s Brazil, was lauded for its ability to bottle a silvery wind—and then let it spill through the speakers and coalesce into a mystic cloud in your mind. That quality runs through Ákadóttir’s prolific catalog in projects such as Pascal Pinon, Samaris, Gangly, and more. But on New Dreams, Ákadóttir wields that shapeshifting beauty with a refreshing command, leaning fully into the spiritual journey of electroacoustic wonder. Ákadóttir owns every element of New Dreams, and yet it feels like a surreal landscape left to mutate and grow to its own devices.

Some may have seen the culmination of New Dreams as a contradiction—Ákadóttir having produced some of the most hypnagogic, misty music of her career via a renewed strength and control. Somehow, she found a way to grasp hold of that space, that mist, and shape it to her desires. “There’s a persona to this record, but it’s also strong in its mystery, raw in its stream of consciousness,” says. “I’m singing louder and I'm taking more space. I'm producing almost all of the songs. It's my album.”

Ákadóttir began her musical career as a 14-year-old in Reykjavik, forming Pascal Pinon with her twin sister and a pair of friends. The group’s glittering folk pop was fueled by a delicate balance of dreamy optimism and warm melancholy. The children of a music obsessive mother and a composer father, the sisters were surrounded by everything from the Cranberries and Tori Amos to György Ligeti and John Cage. Since, Ákadóttir’s music has always explored the vast universe of experimental music while retaining a massive heart at its core.

As the main songwriter and vocalist of Pascal Pinon, Ákadóttir dreamt the way forward. “There was a lot of discovery going on at that time, and we made about every mistake possible. But somehow it felt like there was no obstacle,” she says. “We were having fun together and we never stopped to think about whether we were too young or if it was weird to be making music.”

In addition to Pascal Pinon, Ákadóttir co-founded Samaris, a trio that infused their sterling indie pop with electronics and epic Icelandic poetry in equal measure. Not content to contain her creative output to eight records between two simultaneous projects, Ákadóttir was a member of the Icelandic supergroup Gangly, has collaborated or performed with a variety of artists including Lapalux and Damien Rice, and has scored several television and film projects.

Building from that diversity of experience, New Dreams was built on the road. Ákadóttir first pieced together recordings from her laptop and phone initially intended as demos, but retained for their organic feeling. She decamped to New York City to assemble the puzzles, living in a gear-loaded loft in Brooklyn for just under two years. The bones of the recordings are largely acoustic, composed of guitar, piano, and voice. But wisps of smoky electronics intrude into the frame, distorting the imagery for a moment. Sub-bass underscores a rhythmic pulse; pitch-shifted vocals weave a wobbling harmony. In merging these two different worlds in the studio, Ákadóttir produced an otherworldly realm somewhere in between.

That blend hits a dizzying high on lead single “Taking A Part of Me”, as layer after layer of vocal stitch through taut strands of crystalline percussion. “Blessed be every wound,” she sings, her aching voice full of pain, but growing royally out of the hurt. The drum pattern ripples like a flexing muscle, the alchemical mix of pitch-shifted voices swirling mysteriously. Ákadóttir repeats the title, an elegy to the missing piece, only to reveal the powerful turn: “Taking a part of me/ Taking a part of me higher,” she soars.

“If you ask anyone who writes songs, there are times when you feel like you're doing it and there are times when you feel like you're not doing anything at all—you're just gently reaching out for something,” Ákadóttir says. That world of magical thinking cracks open with lullaby piano as the album opens on “Care For You”, a deceptively simple pattern acting as the gate to a beautiful world beyond reality. Textured synths squiggle and squirm into view, sped-up vocal samples crowding the edges. “You may not know, you may not want to see what I’m seeing/ You may not care to feel for half the things I’m feeling,” Ákadóttir’s voice crackles. There’s so much desperation in the uncertainty, a desire to know that all of the energy and passion and love is worth it—even when it’s not reciprocated.

“‘Care For You’ is a manifesto for the entire album,” Ákadóttir explains. “It's about questioning your judgment and questioning your empathy. It’s about those moments where you’re thinking about another person, and every desperate attempt to get through to them doesn’t work—but you just keep trying and end up questioning your own sanity.”

“That song was written about being unsure of where you stand, but realizing that you're allowing yourself to miss somebody,” Ákadóttir says. “Discovering that permission in yourself is a big, beautiful thing. But it can still leave you unsure, knowing that this person has an effect on you even when they’re not there. It’s a little lullaby about that revelation.”

Ákadóttir’s newfound control is exerted down to the syllable. The letter S holds a magic power throughout New Dreams, each iteration as lithe and chilled as the mystic wind at the record’s heart. And those S’s are no mere accident. “The mix engineer kept wanting to use a de-esser, a tool that would remove excess S sounds, but I hated it. I was super precious about my S’s and wanted this strong sharp S,” she explains. “It’s part of the Icelandic accent. I kept saying, ‘Less de-esser. Less de-esser. More ess.’"

On album closer “Drifter”, the dreamscape builds up to a twitchy alt pop idyll. “I’m falling in softly/ I’m catching the drift/ I’m following my see-through stitches tying our dreams together/ A glimpse of the dawn ahead,” Ákadóttir sings. And as she quests off into the unknown, the unknown greets her with a warm embrace. The glistening piano rises like steam, the sub-bass rumbles to life, and the percussion splashes wider than ever before on the record. And then New Dreams fades out, endless possibilities filling the sonic void.

“I just needed to make this album. It was a beautiful process, and the songs are their own little universe. Or maybe like beads on a necklace, all strung together,” Ákadóttir says. “This was my New York album, but at the end of the day it was the end of a chapter, not the beginning. I moved back to Iceland and came to terms with a lot of things that I hadn't, I fell in love with a lot of things that I hadn't appreciated for a long time. It's all about how much of yourself you make available to people.”