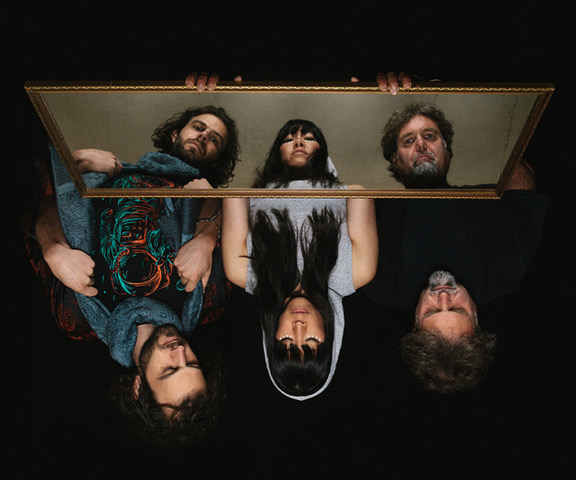 Three-piece KITA are the most exhilarating new band to arise from New Zealand’s bubbling music scene. Based in Wellington, vocalist, writer and actor Nikita 雅涵 Tu-Bryant, keyboardist Ed Zuccollo and drummer Rick Cranson meld the soaring choruses of vintage rock, touches of modern jazz, pop and soul, and warm hints of synth into a singular style.

Born in Taiwan and raised in Auckland, front-woman Nikita 雅涵 Tu- Bryant was always musical, learning violin from the age of five before rejecting the

strictures of classical training in favour of the rock played to her by her biker dad. Singing and writing songs on guitar, she nearly landed a record deal aged 15 with a tune about her parents fighting over their cultural differences. Nikita had some success with her high school band, but endured private turmoil due to feeling like an outsider, with creativity her only escape.

“I grew up very dissonant with my Taiwanese heritage,” Nikita says. “I wanted to be like all of my white mates. I was super-ashamed of being Asian, because both white and Asian people would tease me. I wanted to fit in. During high school, music and drama were my main social interaction with friends because of a strict upbringing enforced by my mother.”

Moving to Wellington to study jazz at New Zealand School of Music, she became disheartened by the attitudes and musical elitism of the students there, and in between writing her own folk compositions and performing at open mic nights, realised that she “wanted to tell stories that connected people through music”. It was then that she formed the band Nikita the Spooky and A Circus of Men, writing her first song in Mandarin, dedicated to a departed relative. “The biggest push to my realising a neglect of my cultural heritage was when my great uncle passed away,” she says. “I hadn't seen him in 10 years, and though I was sad, I felt like I had no ‘right to grieve’ for him as I technically didn’t know him anymore. It was apparent that I needed to bridge this gap, otherwise I would forever feel this space between me and where I have come from.”

Nikita the Spooky and A Circus of Men recorded and self-released an EP and the album ‘Big Sur’, while Nikita also appeared in various theatre productions, one of which, ‘Tide Waits For No Man’, she wrote over the course of four years and staged in Wellington, composing for and performing in the play. Further theatrical commitments found her on tour in Japan, Vermont and New York, and travelling around New Zealand high schools, performing works from Asian playwrights with other Asian actors.

After meeting keyboardist and writer Ed Zuccollo, Nikita realised there was the creative spark for a new band. As the pair clicked musically, they began to tour the country as KITA with various drummers, before Rick Cranson expressed his desire to join the band on a more permanent basis.

Ed Zuccollo is a synth master whose intuitive playing has appeared on a plethora of records. Cutting his teeth as a keys player for bands such as The Black Seeds (with whom he toured Europe), Trinity Roots, Rhian Sheehan, Troy Kingi, OPIUO and Hollie Smith, Zuccollo has also performed many solo shows to a rapt audience with a classic Minimoog synth, and regularly includes Rhodes keyboards and Hammond organs in his musical repertoire. Jazz piano is also part of his skill set, taking him to Thailand International Jazz Fest and Monterey Jazz Festival among other iconic events. Through the mid 2000s, Zuccollo could be found DJing drum & bass in clubs, and more recently he has begun to produce bass- heavy electronic material under the name Zuke. He helps bring a warm electronic edge of modernity to KITA.

Rick Cranson has worked on an extensive range of musical projects, from solo material to NZ psychedelic rock band Little Bushman and jazz group The Woods. A music graduate of Massey University, he has applied his rhythmic abilities to plenty of session work and has toured across Australia and New Zealand with many live acts.

Together, the three members of KITA generate a beguiling sound formed of their many experiences and influences. On their forthcoming EP ‘Try To Find A Way’, Nikita’s expressive voice moves from melodious and mellow verses to a powerful tone on the title track, while Ed’s thrumming synth and Rhodes keys create a lush counterpoint. The soulful ‘Breathe’ moves with a lava flow of Moog bass, mellifluous vocals reminiscent of Little Dragon or Hiatus Kaiyote, and Rick’s tumble of ride cymbals, while the contemplative acoustic guitar and unexpected melodic shifts of ‘Heartbeat’ show another side of the band. ‘Foggy Town’ has the air of classic late 70s rock, its melancholy funk and reverb-drenched vox leading into the most epic of choruses. KITA are currently working on their debut album with Grammy- winning producer Tommaso Colliva (Muse, Razorlight).